At our Dec. meeting our guest speaker was Randy Marchany (bio below). @randymarchany is the University Information Security Officer for Virginia Tech. He is also the director of the VA Tech IT Security Lab, a component of the university’s Information Technology Security Office.   Randy did a great presentation about Continuous Monitoring and how they are implementing it at Virginia Tech. He also talked about how security is changing with “borderless” computing. They have to blend corporate security with ISP model security. He also talked about as much as things change, some seem to stay the same. One of my favorite slides from the presentation was a quote Randy said back in 2002, that still holds very true today: 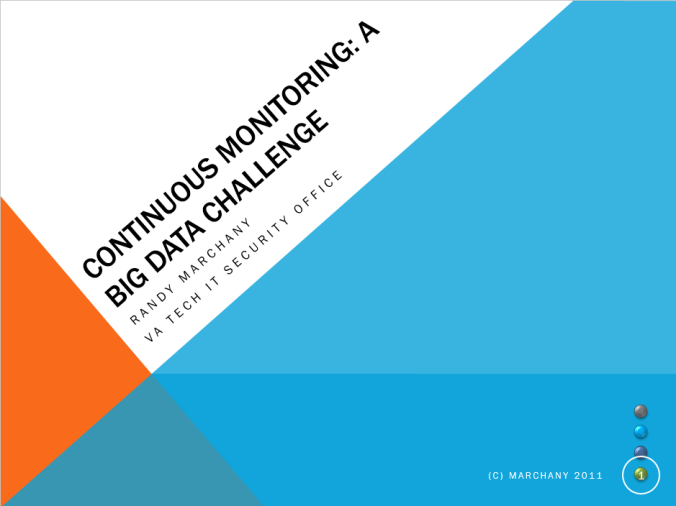 Here is the “What is Old is New Again” presentation:

He is a co-author of the EDUCAUSE “Computer and Network Security in Higher Education” booklet. He is a member of the EDUCAUSE security task force focusing on risk assessment and security metrics. He was a coauthor of the original Center for Internet Security’s series of Security Benchmark documents for Solaris, AIX and Windows2000.

He is one of the original members of the US Cyber Challenge (USCC) Project. The USCC mission is to significantly reduce the shortage in the cyber workforce by serving as the premier program to identify, attract, recruit and place the next generation of cybersecurity professionals. He designed the curriculum for the USCC summer camps.

He is one of the founders of the Virginia Alliance for Secure Computing and Networking (www.vascan.org), a consortium of security practitioners and researchers from VA Tech, U of Virginia, James Madison Univ., George Mason Univ.

He is acknowledged as one of the North American masters of the hammer dulcimer. He is the author of the original theme song of National Public Radio’s nationally syndicated radio program, “World Cafe”. His band, “No Strings Attached” was nominated for or won “Indie” awards (independent record label’s version of the Grammy) for Best Album (String Music) category in 1984, 1985, 1986, 1988, 1990.