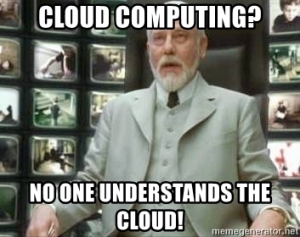 The Cloud! “It’s totally secure in the cloud!” If your manager has uttered anything resembling that phrase, please bring them to the next RISE meeting. We’ll be discussing basic concepts of commercial cloud environments in preparation for a future deeper dive on cloud environment security.

Join us at R&K Solutions on Thursday, February 21, as speaker Ed Summers presents basic concepts and services in Cloud Computing. Even if you live under a rock ‘the Cloud’ impacts your daily life. Whether you’re watching TV, using a smart phone, checking your free email account, or just having your personal data scavenged by the hundreds of mundane things you do every day, some aspect involves a service running in a commercial cloud environment. Some companies are moving to cloud in an attempt to control capital spending. Others take advantage of cloud for fast and flexible generation and disposal of development and test environments. But security in the cloud is often misunderstood and companies that blindly assume too much can suffer serious consequences.

Whether or not you personally work in a cloud environment, understanding the basic offerings and uses of commercial cloud service providers will no doubt be valuable to your IT career. This presentation covering the basic services and concepts of commercial clouds will be part 1 of a two-part talk. Part 2 is scheduled for spring 2019 and will expand on securing cloud environments.

Ed Summers somehow lost his way as a Network Engineer and ended up architecting a secure cloud environment for data center migrations. Title-less between Network Engineer and Cloud Engineer, he finds ways to deliver data by understanding both the infrastructure and applications to distill true requirements from stated desires. His current role has forced him to quickly learn cloud environments and adapt traditional on-premises requirements and processes to the new realm. He continues to serve as a senior Network Engineer for an on-premises environment – digging through pcaps, mediating latency disputes, and commenting occasional iRules for one-off application requirements. Ed has done some pretty cool things in his near 20-year career but is never satisfied on his quest to learn more. In his spare time he enjoys learning Python, shooting, ice hockey, and raising his daughter to be better than him. He holds a B.S. in Electrical Engineering from Virginia Tech.